An HVAC, electric and plumbing contractor, B&I takes on some of the region’s biggest jobs for commercial and industrial buildings.
BY EVAN WILLIAMS
SOURCE: Florida Weekly

THE POST-WORLD WAR II GENERATION was flourishing, but the Vietnam War was in its beginnings. John F. Kennedy Jr. was elected president, the movie “Psycho” premiered, and Hurricane Donna hit Southwest Florida, all in 1960.

That year, a plumber and WWII veteran from Georgia named Gordon “Buck” Harbuck and his wife, Ira, founded a mom and pop business in Fort Myers. The first initials of their names made up the name: B&I Contractors.

Sixty years on, B&I is one of the largest electronic and mechanical contractors in South Florida. The employee-owned company is known for installing and maintaining the guts — HVAC, electrical, plumbing and refrigeration — of major commercial and institutional structures across South Florida, such as hospitals and schools.

B&I is facing new challenges in its 60th year, navigating the coronavirus pandemic while also celebrating its birthday. As part of the celebration, the company is continuing a push toward charitable giving in the education and youth services, health care, and community sectors, which have helped sustain its business. 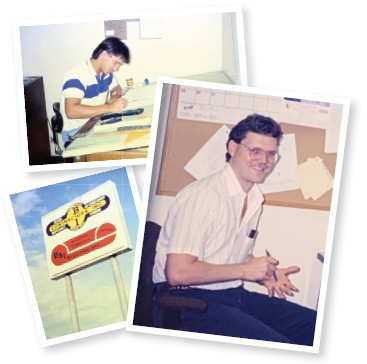 At right: An old B&I Contractors sign; a young Jason Grabowski, now executive vice president and COO of B&I; and a young Gary Griffin, now president and CEO of B&I.

Walk, the company’s community involvement demonstrates its core values of

“I really feel a big part of our corporate mission has been our involvement in the community,” he said. “We’ve done that in a lot of different ways.

“My personal top priority is education. Education is the most important thing we can offer to our next generation, the young people. So B&I is very supportive of universities and state colleges.”

As the pandemic ramped up across Florida, B&I in April completed installing HVAC (heating, ventilation and air-conditioning) for a 500-bed field hospital in Miami.

It also worked with Lee Health and RDJ Construction in March to develop a plenum box, a familiar concept in the world of HVAC. The box is designed to fit over part of a hospital bed, catching discharge from a patient’s cough and filtering the air. The units were used at Gulf Coast Medical Center and Health- Park in Fort Myers to help slow the spread of COVID-19. 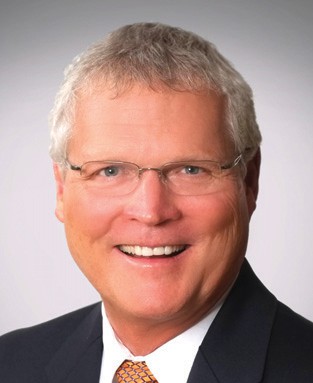 Its activities in 2020 have included hosting a blood drive and providing sponsorships to benefit organizations including the Foundation for Lee County Public Schools, Hillsborough Community College, Ringling College of Art & Design, Jackson Health Foundation, and the Joe DiMaggio Children’s Hospital.

While the company’s founder himself never attended college, Mr. Harbuck, who died in 2010, was a talented tradesman and business leader. After coming to Fort Myers from Georgia on a job, he saw opportunity in the region, which became one of the fastest growing areas of the country.

“He and his wife Ira, they talked about it, they liked it here and said, ‘why don’t we stay here and open our own business,’” Mr. Griffin said. “So, as he put it, he started the company with a station wagon, him and his wife. He was operating out of the station wagon most of the first year before he was able to hire a couple of technicians.” 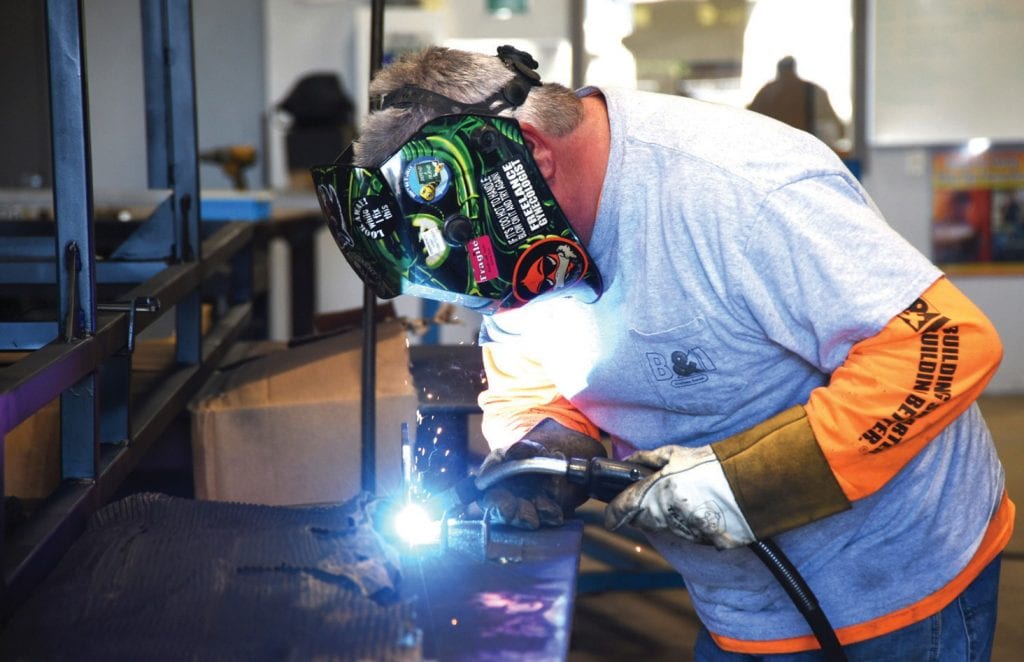 A B&I worker at the company’s prefabrication shop in Fort Myers. At right an old and recent pictures of B&I’s headquarters in Fort Myers. Below B&I founder Gordon Harbuck (in the red jacket) at a holiday gathering.

He and Ira later separated and Mr. Harbuck remarried. Through the 1980s, he grew the company to one of the largest firms in the region.

As a boss, he could be blunt.

“As long as you listened to him and tried to improve, the next minute he was fine with you. But you always knew exactly where you stood with Gordon.”

Mr. Harbuck considered selling the business, but decided on a different exit strategy. He transitioned B&I to an employee-owned company (ESOP). Employees earn shares of stock based on how long they work there and B&I’s profitability. They are paid the value of their share upon retirement.

After Mr. Harbuck retired in 1991, he was succeeded by Hugh Clark, whose soft-spoken personality was the opposite of his predecessor.

“I like to think I landed somewhere between the two,” said Mr. Griffin, who counts both as mentors.

A fourth-generation Southwest Floridian, Mr. Griffin, 57, interned with B&I in 1984 while pursuing his mechanical engineering degree at the University of Florida. After working his way up from project engineer to vice president, he was appointed president and CEO in 1995.

Under his leadership, B&I has grown in annual revenue by 10 times, from about $12 million in the mid 1990s to $130 million last year, with some 700 employees and offices in Fort Myers, Tamarac, Sarasota and Tampa.

He credits B&I’s investments in new technology and in-house training as helping it grow. BIM computer modeling systems and a sheet metal shop in Fort Myers allow the company to manufacture its own duct work, for example, for projects such as the Lee Health Gulf Coast Hospital expansion or a new high school in Gateway.

At the same time, finding qualified workers to utilize the technology has presented challenges.

“The whole virtual modeling of buildings has been easily the greatest challenge and greatest advancement we’ve seen in our industry,” Mr. Griffin said.

As sheet metal department manager, Jon Castro leads B&I’s pre-fab shop where 10,000-pound steel coils are used to create parts. B&I increasingly adopted BIM along with the LEAN initiative, a program that eliminates waste from the fabrication process, over the last decade.

“We noticed it was a way of delivering projects on time with better quality,” Mr. Castro said. “It almost wasn’t a question of if we were going to do it, it was how soon. Our executive team and mangers saw this way ahead of the curve and invested in these types of machines in the shop, the software and the people to provide training to use all of these things.”

The company is different from the one Mr. Harbuck started in other ways too. It’s more corporate.

“The old days when you used to go out and have a beer on the loading dock are gone,” Mr. Griffin said. “And we think that’s best, that’s the way it should be. We’ve gone from being a privately owned mom and pop company, to, I would call us a very disciplined corporate entity.”

Still, the lessons Mr. Harbuck passed on remain embedded in the corporate values of Quality, Integrity and Teamwork that B&I has adopted.

“He took such pride in the reputation of B&I as having the highest capabilities and having that level of quality,” Mr. Griffin said. “(That) is a huge thing that he taught me. He was very focused on financial systems too. Every dollar we spend is tracked carefully and accounted for. For a person who himself never went to college he was a very capable financial manager.” 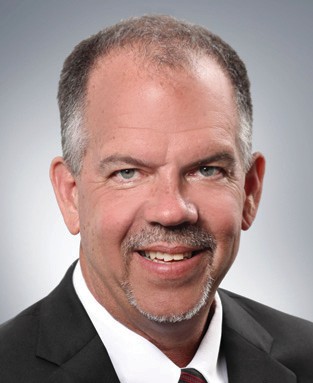 The company’s most significant economic challenge came during the Great

Recession, with B&I losing $1.8 million during its worst year. But focusing on repair and maintenance work in that time, it was able to keep most of its key executive and management staff. Later growth skyrocketed.

Now with the coronavirus pandemic wiping out business from many hotels and service industry clients, and creating the need for social distancing among workers, B&I’s 60th year promises to be both challenging and memorable, said Jeff Zenoniani, whose own birth in 1960 was among that year’s notable events as well.

“We’re constantly dealing with the changes due to the pandemic,” said Mr. Zenoniani, who as vice president of service is responsible for HVAC maintenance and repairs that could take place at any hour, any day. “…So, lots of meetings.”

He expects the company will come through this challenge with the help of a top-notch team.

“I have been blessed with working with many great people,” he said. “I have found many great people, hired them and have them working here. They have allowed us to do great things. From diagnosing an allusive problem and fixing it the first time, to a seamless production like change-out of 242 units in an operating hotel, there is not much we cannot do.” ¦